When Roger Met Guy: A National Choir is Born 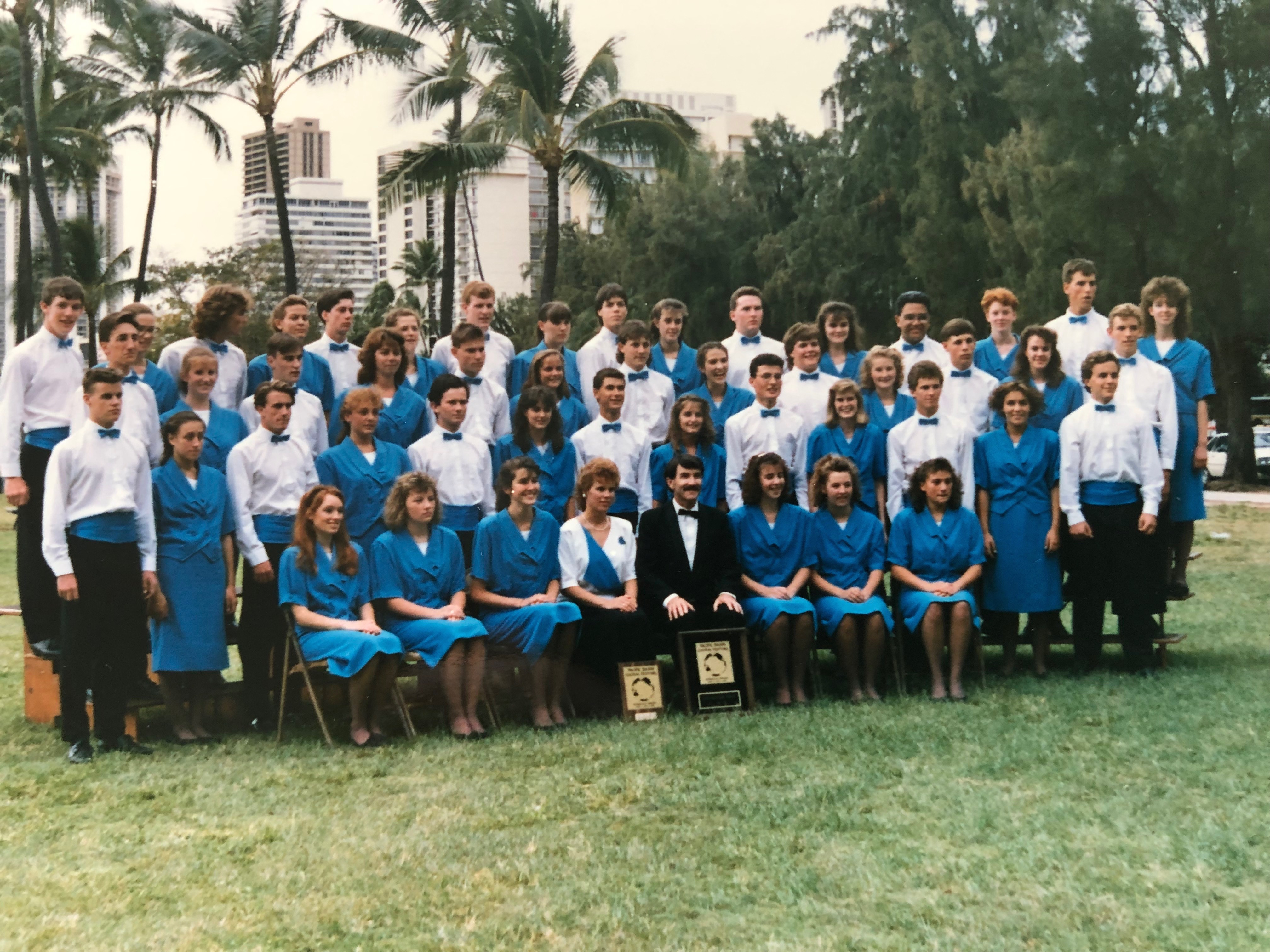 Roger was appointed Musical Director in 1987 and remained  in the role until 2000, but his relationship with NZSSC goes back to the formative years of the choir in the mid 1980s.

In 1990, Roger received a NZ Commemoration Medal and in 1991, the Queen’s Service Medal for Services to Music. 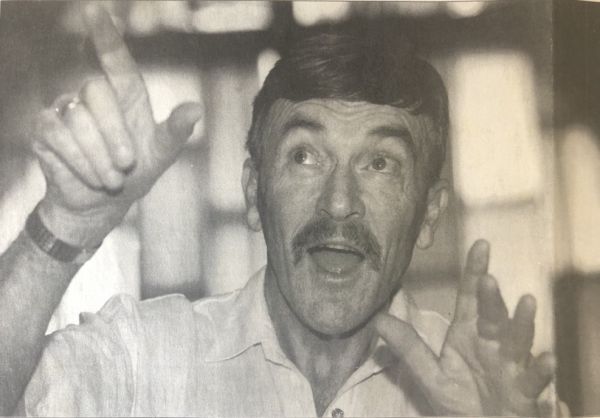 Sitting in a noisy café in Tauranga talking to Roger and his wife Denise, I’m in no doubt that Roger’s success is in large part due to the rapport he develops with students.

Roger says that while there were clear expectations of students prior to each choir even coming together, he was also careful to let them know they were going to have fun in NZSSC, “I wasn’t scary, I always believed in getting the best out of kids by showing them a real spark of fun, ” he says.

“It’s all about the eyes; the window of the soul. I’d give lots of praise and say ‘YES, that’s what I like!!”

Roger was a stickler for his students raising their hand if they made a mistake, he encouraged them to ‘own it and commit to fixing it’. He’d tell students, “I trust you to do that, I believe in you!”.

“You have the choice … I know where I want to set the bar and I am asking you to come with me,” he’d say to each new choir.

Roger’s students needed to know two works from memory at the start of the first rehearsal, including Set me a seal upon your heart by Rene Clausen. When they first came together, he’d encourage the students to quickly get to know as many people as possible.

“By the next morning, the first morning, I would hand them the programme for the concert at the end of the week and say, ‘Right this is what we are working towards'”.

“He was always animated and full of excitement; the kids caught that very early. It was an infectious passion, they felt he believed they could do it,” says Denise.

Roger is describing the ‘five spaces’ to me. He is effusive about the very clear vocal intentions he has for the kind of sound he is after.

It’s the nasal cavity he’s most excited about, the ‘cathedral of sound’ enabled by the ‘smile position’. Demonstrating with his hands, he tells me, “put the sound in your cathedral”.

Roger laughs as he shows me pictures of himself with a full head of black hair. I hadn’t thought to ask, but clearly it’s a toupee! Did the students know? “Of course, they did!” he chuckles. 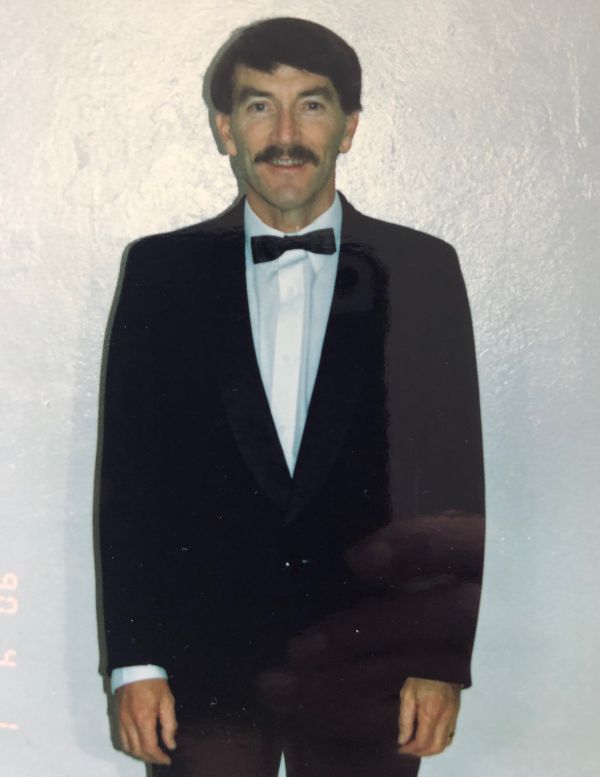 Throughout the 1970s and 80s, Dr Guy Jansen (1935-2019), National Officer for Music for the  Department of Education, had been providing opportunities for school choirs by facilitating holidays courses. He and Roger already knew each other well and in 1985, the holiday course was held at Roger’s school, Havelock North High School (Roger was HOD of music there).

Roger says he was on a bit of a roll during this period with consecutive successes at the Westpac School Chamber Music Contest. There was no Big Sing yet so the Westpac Chamber Music competition was the only means for school choirs to compete at a national level. Generally only two or three choirs (with up to 15 members each) from the whole country made it to the nationals. Roger’s choir, aptly named The First Fifteen, made it through every year from 1983-86, taking top honours in 1984-86.

By this time, Guy had already founded the National Youth Choir, and was inaugural director. He was pushing to develop a national secondary students choir.  Roger recalls it was in Havelock North when Guy said to him, “Let’s call it the New Zealand Secondary Students Choir’.  It would be another year before the name was finalised but Roger remembers that Guy was adamant that ‘students’ was in the title rather than ‘schools’ as not all schools were going to be represented.

Obvious Man for the Job

With the demise of the choral section of the Westpac contest after 1986, the New Zealand Choral Federation came on board trying to establish a national festival. The Big Sing wasn’t established until 1988 when it was called ‘NZ Secondary Schools Choral Festivals’. The Big Sing name came along in 2000.

Guy and Roger were both involved with the newly-named NZSSC, which was still functioning as an auditioned-by-cassette-tape school holiday course, but in 1987, Guy encouraged Roger to take on the role of Musical Director, “He told me I was the obvious man for the job”.

Roger says he definitely kept his day job as other than basic costs being covered, there were never any fees paid to anyone in music team, made up of seven adults.

Good enough for Charles and Di

The 1988 NZSSC came together as a ‘one-off’ choir solely to perform with the National Youth Choir and NZSO at this very special concert in honour of Sir David Willcocks. The choir performed two works, Prodigal Country by Douglas Lilburn and Carl Orff’s Carmina Burana.

Sir David, who had been Director of Music at King’s College Cambridge in the 1960s and 70s, directed the music at Lady Diana Spencer’s wedding to Prince Charles in 1981. A regular visitor to New Zealand, he was friends with Youth Choir director, Peter Godfrey.

Selection of membership for this one-off national choir was pretty simple. Schools were asked to send in a cassette tape of students singing one song, along with some vocal exercises, for Roger (along with other music teachers including Heather Keith, first NZSSC administrator, and Shona Murray, pictured on piano) to listen to and make a selection from.

About 150 cassettes were received in the mail, from which 90 secondary students were chosen to perform with 60 members of the National Youth Choir. Rehearsals involved just two school holiday courses before the big performance.

For all involved, this was a truly memorable experience!

Following the concert, the 1988 choir disbanded.  Auditions for the 1989/90 membership, the first face to face auditioned choir, involved more than a cassette in the post. Roger hit the road visiting towns and cities across the country, often staying with friends and family to cut down on costs.

This first ‘full audition process’ was developed further in later years.  Voice teacher and choral director Jean Cummings, who was at Burnside High School before Sue Densem, came on board for the 1991/92 choir. Roger and Jean would travel across the country for a week of auditions, the places they visited dependent on the location of applicants.

1989/90 was also when Roger introduced the eighteen-month membership cycle, a formula that is still in use today.

Rehearsals worked in 90 minute slots during the day with locations rotated across the main centres, similar to what still exists.

It wasn’t until the 1999/2000 choir (Roger’s last) that the NZSSC trust board was formed, the first chairperson was Bruce Murray.

Roger says it’s always been a challenge to make NZSSC as inclusive as possible and to create opportunities for students from all walks of life. During his time, NZSSC performed in many smaller towns and he said it was often the students from these places who had the community support to more easily raise funds. 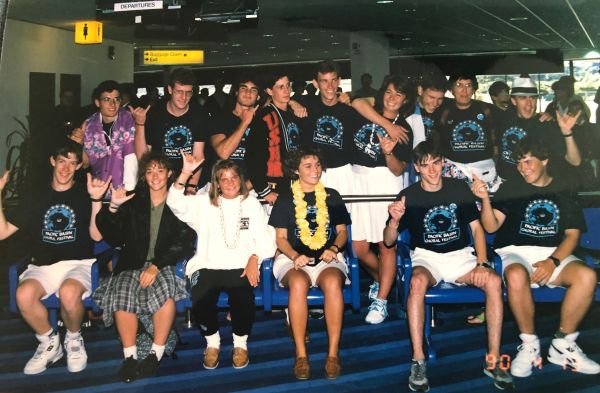 In 1990 and 1992, NZSSC represented New Zealand at the Pacific Basin Choral Festival and was named Outstanding Choir of the Festival. In 1990 Roger also won the Best Director Award.

The 1994 choir cycle culminated in a tour to Singapore where NZSSC performed in concerts and participated in workshops with the Singapore Youth Choir. Below, the 1994 choir, just home from Singapore and performing at the airport. 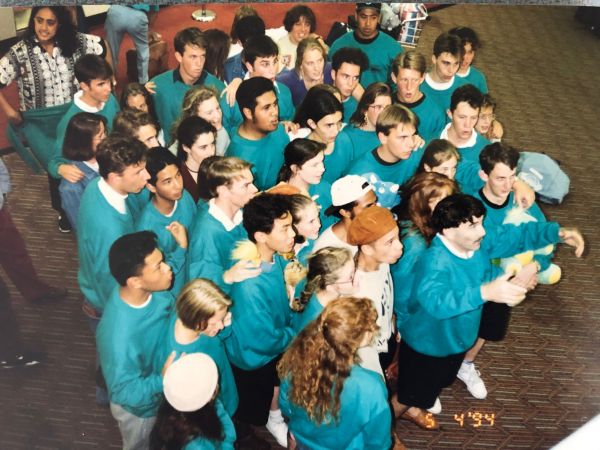 The 97/98 choir went to Australia, performing in Brisbane and Canberra as part of the Australian SME conference in Canberra, finishing the tour in Sydney including a performance at the Anglican Cathedral in Pitt St.

Roger’s final choir went to Canada in 2000, initially for a choir festival in Toronto and a massed choir with Swedish conductor Robert Sund. In Calgary, they were guests of the Calgary Youth Choir during ‘stampede week’, a time when everyone dresses up in cowboy uniform!

Then it was off to Banff to see a rehearsal of a new work by world-famous Polish composer, Kristoph Penderecki who was present and conducting for this all America premiere performance.  Exhausted from the stampede the day before, Roger was slightly frustrated that some students fell asleep during this once in a lifetime opportunity!

Finally the choir moved on to Edmonton as guest at the International Society for Music Education Conference.

Roger’s own children were all in NZSSC, eldest daughter Shelley in the one-off 1988 choir, younger daughter Virginia (formerly HOD music at Rangitoto College and now director of Epsom Girls’ Paradisum) in the 1989/90 choir (pictured below) and son Hamish in 1991/92. 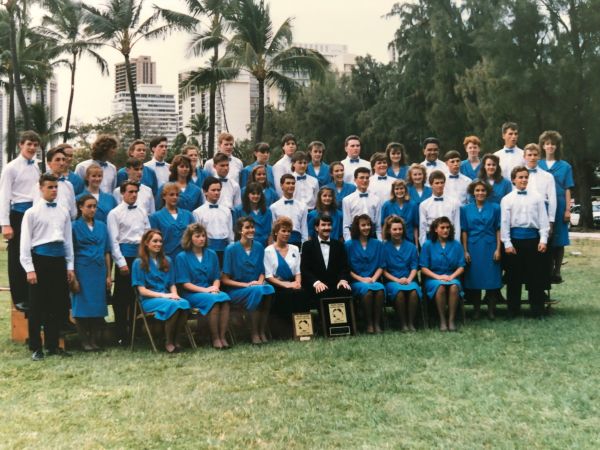 Roger always knew he wanted a career in music, right from when he was very young. One of four boys in a musical family, he learned piano from the same teacher from the age of 7 to 20. For high school, Roger went to Wellington College but there was no choral activity back then ‘it was all about sport’.  Roger went to Wellington Teachers’ College for primary training during which time he completed his Trinity College LTCL in class music teaching. Later on, he pursued private singing tuition with Beatrice Webster before gaining his FTCL in Voice.

He was always involved in church music, Roger was directing choirs as a 17-year-old and sang a lot at Teachers’ College.

Roger taught music at Havelock North High School for 21 years until moving back to Wellington and becoming HOD Music at Hutt Valley High (1996-2003). Following his time at NZSSC, he was director of Wellington Youth Choir, 2000-2008.

Can anyone learn to sing?

Roger feels that one of the biggest barriers for young people learning to sing is an undeveloped ear. “The environment children grow up in contributes enormously. I’ve seen kids who think they can’t sing, but with some concentrated ‘ear’ training they can be amazing within six months”.

It’s not a piece of cake

If Roger could change one thing, it would be better training for music teachers. Choral conducting should be taught at more universities, he says.  Like the training in his day, he feels there’s too much focus on instrumentalists in teacher training, and that many young music teachers come out thinking directing a choir is a piece of cake.

For now, Roger is still busy tutoring students, two of whom (Oscar and Sarah from Bethlehem College) are in our current choir.

He keeps in touch with many previous NZSSC members including Johnathan Lemalu, Simon O’Neill, Rowan Johnston, Anna and Matthew Leese, the Pierard sisters, Anna and Madeleine, Charlotte Murray and Jayne Tankersley, to name just a few.

NZSSC alumnus and internationally acclaimed conductor Tecwyn Evans has said, “I was hugely inspired by Roger Stevenson, his love for his singers, his flair for choral sound”. 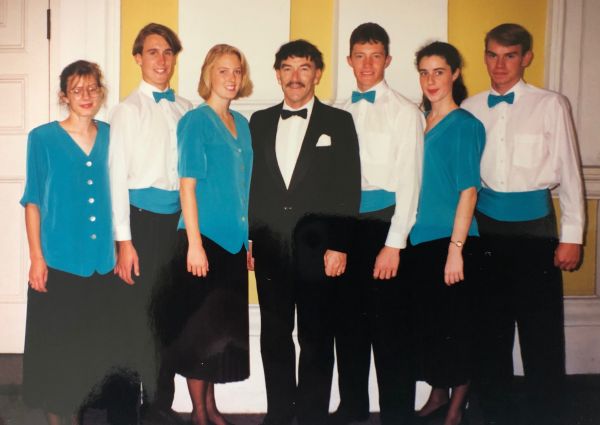 Roger with Havelock North members of the 1994 choir, in Singapore