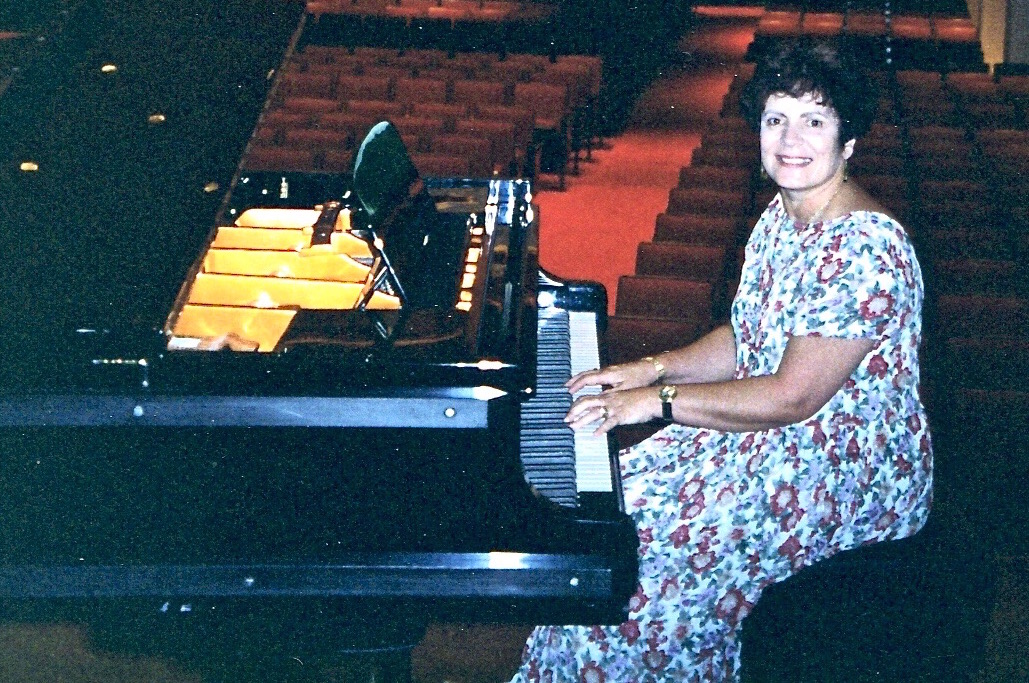 It’s hard to keep up with Shona Murray. Meeting her for the first time, her enthusiasm is infectious—and her resume impressive.


There’s so much to talk about with Shona across the arts, sport and family that her decade as NZSSC accompanist almost feels like a blip in her exceptional career—one that’s seen her awarded many accolades including the Queens Service Medal and the National Excellence in Teaching Award.

During nearly 40 years’ involvement with Tawa College, 21 as head of the music department, Shona has also directed her own award-winning choirs. We asked Shona about her love of music and her time with NZSSC …

Shona, what did you enjoy most in your ten years as NZSSC accompanist?

I loved that the choir brought students together from all over New Zealand, from both large and tiny schools.  I was particularly proud when students took what they had learned in NZSSC back to help their own choirs, Katie MacFarlane (choir director and Choirs Aotearoa board member) did that for her school in Timaru.

I always enjoyed the cultural diversity and that we had so many boys wanting to sing! That doesn’t happen everywhere and was commented on when we toured to Australia in 1998.

It was humbling to get the chance to travel to see other cultures and other choirs. What a privilege!  Sometimes at festivals, where many languages were spoken, music might be the only commonality—our common language. The image above is of me at the Bosendorfer Grand Piano in Victoria Hall when we were on tour in Singapore. 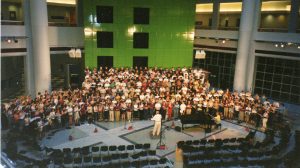 In 2000, NZSSC was part of a massed choir in Canada, directed by Robert Sund

I remember the trip to Canada in 2000 with great excitement. The massed choir performance directed by Robert Sund was incredible. In Calgary, we sang with the Calgary Youth Choir during ‘stampede week’ when everyone dressed up as cowboys. 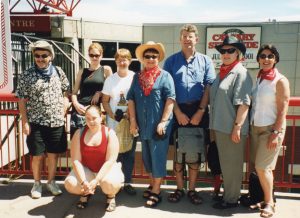 NZSSC music team during ‘stampede week’ on the Canadian tour

Do you keep in touch with past students?

Absolutely, I love staying in touch through Facebook and watching the progression of past-students and how they still use their music.

Opera singer Amelia Berry and Emily Mwila are two I follow closely and am still in touch with. I remember baritone Johnathan Lemalu very fondly from NZSSC. He stayed with us as a 6th former and had a great sense of humour. It’s amazing to think that Rowan Johnson, who now directs award-winning choirs at Westlake High School, was once such a shy boy!

Your own music taste is quite eclectic …

I really love Elton John.  I’m going to my fifth Elton John concert in Australia in January. James Galway said that Elton is ‘the Schubert of our times’!

I’ve been Involved with baroque, avant-garde and rock. When Charlotte was a baby, I musically directed SaulTalk, a home-grown rock musical that was initially performed at the Mana Arts Festival and then toured nationwide. We did 36 performances in all.

I’m passionate about breaking down stereotypes of who can sing and the hierarchies that exist around music genres. It’s the same in music education, kids shouldn’t specialise too early – they need as wide an experience as possible.

Shona, where do you think your love of music came from?

Some of my earliest memories are of dancing and singing along with Chinese street parades. I was born in Honan Province in China; my parents were missionaries who worked in a famine relief camp there. We moved back to New Zealand when I was seven. My father was a minister, and a fine violinist and choir enthusiast. I was often called on to play for him and for the congregations and choirs. The church played a huge part in my musical beginnings and this is where my love of accompanying and conducting began.

In my fourth form year, we moved to Tawa in Wellington and I went to Mana College where I was taught by David Sell (later a professor at Canterbury University and music reviewer for The Press). He directed huge choirs and had a big impact on me.

On leaving school I went to Teachers College and throughout the 70s, while raising my children, I undertook a Bachelor of Music in Performance  (Pipe Organ) under Maxwell Fernie and completed my LRSM and LTCL in piano. I continued to learn piano, taking lessons with Judith Clarke.

Music and sport is in the blood, Bruce is also a singer and was a former NZ cricketer. My granddaughter Amelia Kerr, is already a world-record-scoring cricket player!

My daughter Charlotte Murray was in NZSSC and is now a music teacher and choir director. She directs two choruses at Tawa College, Maiden Tawa and Acafellas and this year has made history alongside  four other women qualifying as judges for  the Men’s International Barbershop Harmony Society in the USA.  She’s also directed the Musical Island Boys (gold medal-winners, International Barbershop Quartet, Las Vegas 2014) and still directs Vocal FX (ranked in the top 10 choruses in the world).

My husband Bruce was also involved with NZSSC. He was the first Chair of the Board in 1997.

I took over from Guy Jansen directing an older group called the Summerset Singers. I bring students in from Tawa College to sing with us. It’s great to bring young and old together.

Music has also taken me into prison. When I was a teenager, my father was the chaplain at the Arohata Borstal and I would accompany him on visits and play the piano. That’s how I made friends with Juliet Hulme, who the film Heavenly Creatures was based on. She’d come to lunch at our house and I taught her how to knit a dress!

Who influenced you most in your career as a music educator?

Everything goes back to Guy Jansen and his role as National Officer for Music for the  Department of Education.

Music and the other performing arts were hugely valued in our Teachers College training back then, that’s where I had singing lessons, and all schools had music advisers.

In the early days of NZSSC, I had the privilege of being the accompanist for Professor Rodney Eichenberger, who Guy regularly brought out to New Zealand. We learned so much from him about the power of gesture in conducting a choir.  His video ‘What they see, is what you get’ also impacted choral directors throughout NZ.

Roy Tankersley had a lot to do with the success of Tawa College. He was Head of Department for music when I started teaching there part-time in 1977. Roy was also the director of the Wellington Bach Choir when I was the accompanist and assistant director. I loved working with him. His daughter Jayne Tankersley was in NZSSC with my daughter Charlotte, under the direction of Roger Stevenson.

I took over as Head of Department at Tawa College in 1984 and developed several successful choirs over the years.  We took the chamber choir Twilight Tones to San Francisco in 2006. This chamber choir included Year 12 student Isaac Stone, now the director of his own chamber choir, The Blue Notes.  Isaac has been a member of  NZSSC and the National Youth choir. He currently sings in Voices New Zealand.  As well as leading the  choral programme at Tawa College, he also directs Wellington choir, Supertonic. 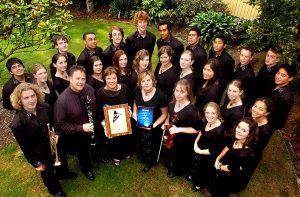